David Howard Thornton – Art The Clown from TERRIFIER – is Coming to Shock Stock 2019! 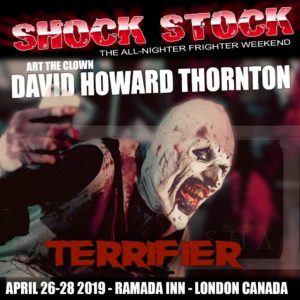 ‘David Howard Thornton was born on November 30th, 1979 in Huntsville, Alabama. He is an actor known for work in stage, film, and voice over. He is best known for his roles as Grandpa Who in the 1st- 5th national tours of “Dr. Seuss’ How the Grinch Stole Christmas: The Musical”, the voice of Shizoku and others in the video game “Invizimals: The Lost Kingdom”, The Joker in the YouTube series “Nightwing Escalation”, and Art the Clown in the film “Terrifier”. David scored a 2017 Voice Arts Award nomination for his performance on the Western audio drama podcast “Powder Burns”‘